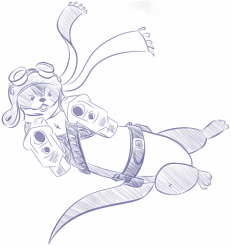 Sometimes you write a story with characters you love so much you want to keep writing about them forever.  For me, that was Captain Phinnaeus Crowhammer, his starship pilot, Otter--that's him in the artwork by Jenny Haines, looking all calm, cool and badass--and the rest of Three Penny Raven’s crew.  I love Otter and Crowhammer. I mean seriously love them.  I love them so much I keep finding excuses to write more stories even though I’ve only found homes for half of them so far.

Anywho.  It might amuse you to know that this fantabulous crew of starfaring misfits came about as the result of a dare from my writer friend Kate Shaw .  We were discussing dirigibles and starships and these strange flying yacht things that keeping popping up on the internet when I happened to mention a flying yacht would have to be piloted by an otter. Wearing goggles. And one of those World War II flying ace leather caps. Oh, and a scarf.  Gotta have a scarf to go with the goggles and leather cap.  Kate’s response (in typical Kate fashion) was: ‘I dare ya to write a story about that.’

Ridiculous, right?  I mean, who writes a story about a swaggering, foul-mouthed, over-bravadoed starship captain with an Otter named Otter for a pilot?  Apparently, I do.

Interested?  Well, here’s the links to where you can find some of their stories.  Oh, and before I forget: major props to graphic artist Jenny Haines for the artwork.  She’s amazing!  Who else could take my description of an otter with otter sized guns, a leather flying cap and goggles who flies a starship...oh, and throw some Samurai Jack style elements into the background’ and turn it into something this magnificently cool?  I squeal like a little girl every time I look at it.